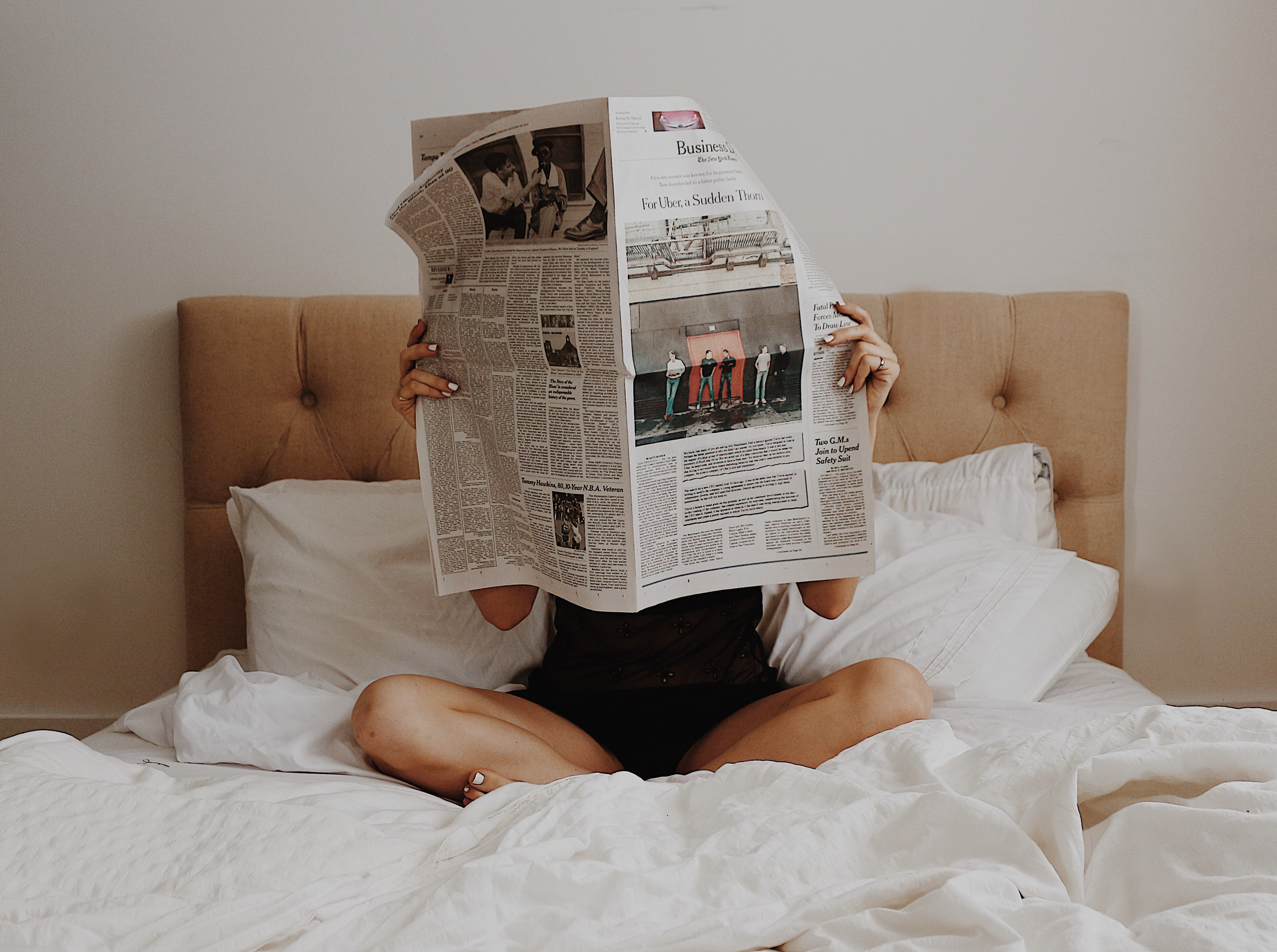 I’m a journalist, which means that it’s my job to be in the know. And while it’s necessary for me to learn how to unplug sometimes, I generally love indulging my curiosities by knowing what’s happening in the world.

But let’s be honest for a second…when was the last time you picked up a newspaper or watched the morning news? Today, you don’t have to. Podcasts allow you to integrate information and good storytelling into your morning routine.

My mornings have become the highlight of my day. They begin with a cup of tea and Michael Barbaro’s news briefing, along with anything from ghost stories to marriage advice to career inspiration. I listen for 45 minutes while I stretch, get dressed, and put on my face (among other things). It’s become the most sacred hour of my day, my version of self care.

But who do you listen to? The world is big and there are so many voices on virtually any subject. Rather than being barraged by half-baked facts, cheap click bait or unintelligent discourse, choose to be inspired by intelligent narrators who offer context and insight on things you actually care about. So for those of you looking to revamp your daily digest – whatever the hour – I’ve rounded up a list of podcasts to help you start your morning off right.

This New York Times’ popular podcast recently ranked No. 7 on Apple’s top charts for podcasts, with 2 million listeners per day. The show is seen through the eyes of a journalist, who is often interviewing someone relevant to it. I enjoy how present the reporters are in each 20-minute morning episode.

This New York Times’ popular podcast recently ranked No. 7 on Apple’s top charts for podcasts, with 2 million listeners per day. The show is seen through the eyes of a journalist, who is often interviewing someone relevant to it. I enjoy how present the reporters are in each 20-minute morning episode.

Hosted by NPR, Invisibilia (which is Latin for ‘invisible things’) combines narrative storytelling with science. Each episode asks questions about those unseeable forces that control human behavior and shape our beliefs and assumptions. The fifth season, which was released in March, takes a real departure from the series, with a deep dive into the science of desire. It offers an emotional survival guide on how to locate the actual source of your pain, tell fake from real, and find your true love, with conviction. And bonus, they say you’ll be able to spot a celebrity in this season.

Because one wildly successful podcast is never enough, Lore host Aaron Mahnke is back with two new podcasts: Unobscured and Cabinet of Curiosities. This podcast doesn’t take itself too seriously, though Mahnke always gets his facts straight, gathering tales and stories of some of the most unusual people, places, and things in the world. Twice a week, he dives into bizarre corners of history, from unexplainable moments and coincidences to people with unusual backstories. If you like Lore and want more, Cabinet of Curiosities just might be the weirdest (in all the right ways) way to wake up on a Monday morning.

Psychotic therapists. Botched surgical procedures. A faulty medical system. Laura Beil tells the story of a former neurosurgeon whose horrifying deeds continue to haunt Texas. This podcast explores what happens when the person at the other end of the scalpel can’t be trusted or stopped until it’s too late.

The Daily Show with Trevor Noah

The show that was made famous by Jon Stewart is now run by Trevor Noah, that South African comedian who showed us how sad political realities can lend themselves to humor. This podcast shares highlights from Daily Show episodes. If you haven’t seen it, this may explain half the office jokes that you didn’t get. I can’t help you out with the other half, but if they contain puns or a verbal ‘Bdum tzzzzz’, I’d suggest you get better friends. And keep watching Trevor Noah.

New York Times’ journalist Rukimini Callimachi brings us along as she attempts to understand ISIS. With the War on Terror costing the U.S. billions of dollars and having been fought for nearly 20 years, Callimachi is hoping to get at who the country is really fighting and why. She also explores why people join ISIS, as well as explain why she brings trash bags with her to the frontlines of the war. This podcast is both gripping and unnervingly relevant.

It’s difficult to explain how a man’s passion for city flag design can be so endearing (not to mention entertaining), but Roman Mars’ diatribes are just that. Illuminating how design impacts the way we live in ways you would never expect, these 15-minute episodes contain great storytelling. Some of my favorites include Guerrilla Public Service, The Gruen Effect, Heyoon, and Walk This Way.

Dax Shepard will tell you he loves talking to people. This podcast was born out of his fascination with the messiness of being human and what it means to be vulnerable. This is Humans of New York meets dating expert Matthew Hessey meets New Yorker critic James Wolcott, rolled into one podcast. Shepard has become my own armchair expert of life, leaving each episode with at least one trope on how to be a better human.

Stuck in a rut at work? Adam Grant takes you inside the minds of some of the most unusual professionals to explore the science of making work not suck. This organizational psychologist visits high-performing teams and fascinating work environments that will forever change the way you see your job. Some of my favorite episodes include How to Love Criticism, The Daily Show’s Secret to Creativity, and Too Close for Comfort.

You’re not alone if you’re totally obsessed with the whole Elizabeth Holmes/Theranos story. It’s the unbelievable tale of ambition and fame gone terribly wrong. ABC News chief business, technology and economics correspondent Rebecca Jarvis takes us on a three-year-long investigation into how the world’s youngest self-made female billionaire lost it all over night. This six-part series includes the never-before-aired deposition testimony of Elizabeth herself. Whether or not you’ve been following this story, beginning it might result in some delayed Game of Thrones episodes.

Three seasons in, this show gave me so many ‘my mind is blown’ moments. As Radiolab’s first spin-off series, More Perfect breaks down how Supreme Court rulings affect the lives of those living far away from the bench. It’s a fun deep dive into some of the biggest rulings that have shaped our nation, from marriage and money to public safety and sex.

Leave it to Malcolm Gladwell to extract a gripping story from the American Federation of Teachers’ Houston chapter. Now in its fourth season, Gladwell’s brilliantly addictive Revisionist History offers counter narratives to popular events or ideas.  Dive into the world of Pat Boone, the Boston Tea Party, law schools, and, yes, even Jesuitical reasoning. As always, he describes it best: ‘It’s just delightful to discover at my grand old age this entire new universe of characters, geniuses and weirdos,’ he told Rolling Stone.

The popular veteran storyteller Ira Glass has an incredible knack for connecting listeners from diverse backgrounds. Glass and his team cover a story weekly, on everything from an exploration of the true nature of love to the tale of a drunken moose. Their two-part series on education here and here also was particularly fascinating. When you land the right episode, this delightful telling makes for great middle-of-the-night company.

This podcast is far from new, but it still makes the cut every year. Each episode aims to investigate this strange world, delving into scientific and philosophical topics through a music-rich documentary-style narrative. Some of my favorite episodes include Alpha Gal, Darkode, The Girl Who Doesn’t Exist, and 23 Weeks 6 Days.

Looking for something with a bit more heart? Song Exploder has all the feels. With guests like Björk, U2, Metallica and Solange, Los Angeles-based Hrishikesh Hirway highlights one song in each episode. It asks musicians to take apart their songs and discuss the decisions behind the work they created. Hirway isolates individual tracks, delves into the context behind the song, and tells the gripping tale of how and why each artist brought their song to life.

Is taco yoga a thing yet? Someone get on that. ⁠

If you live in a city long enough, every street co

If wearing leggings as pants is wrong, I don’t w